Orsk oil refinery is the only one in the Orenburg Region with a design capacity of 6 million tons of oil per year.

We sell products throughout the entire territory of the Russian Federation and to many other countries. Thus, a significant portion of Orsk oil products are sold on the domestic market, completely covering the needs of the Orenburg region. One portion is traded on the St. Petersburg stock exchange, and another is exported. Orsknefteorgsintez products are popular all over the world. Oil products are delivered to neighboring countries: Kazakhstan, Tajikistan, Uzbekistan, Belarus, Kyrgyzstan. The major portion of oil products are delivered to foreign countries - Italy, the Netherlands, Turkey, Malta - via ports: Novorossiysk and Kavkaz; and stations: Grushevaya and Vyshesteblievskaya. Products are shipped by different logistical means. 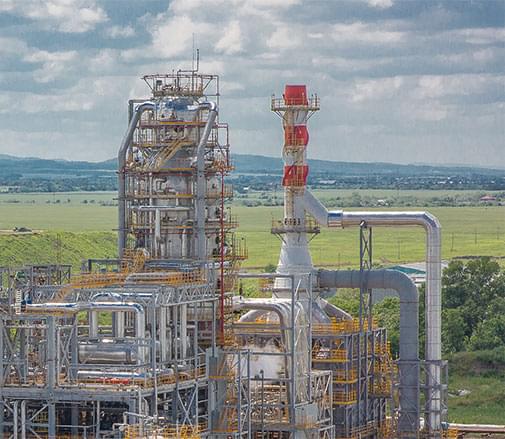 The plant has modern conversion and refining facilities and produces a wide range of high-quality petroleum products that meet all the environmental standards of the modern market.

In 2011 a large-scale Production Upgrade Program

was launched at the Orsk refinery

with the participation of Forteinvest

which enabled the production of Class 5 products

The Orsk oil refinery was constructed in 1935, receiving the first oil through the new oil pipeline, Caspian-Orsk, on December 24 - this date is considered the birthday of the plant. On January 6, 1936, the plant produced its first gasoline. During the first year, the refinery processed 152.8 thousand tons of oil.

In 1939, the plant was named after the Hero of the Soviet Union Valery Pavlovich Chkalov, a test pilot, by the resolution of the USSR government

In 1942 the first oil lots were received. During the war, the refinery increased its yield by 2.5 times, expanding the range by almost five times.

Every third ton of oil for Soviet military equipment was from Orsk. The Orsk Oil Refinery received the Order of the Patriotic War, 1st class for supplying the Soviet Army and Navy during the war.

Over 2300 people work for the company. 38% of employees have higher education. Orsk Refinery was commissioned in 1935; it became a part of ForteInvest in 2011.


In 2020, Orsknefteorgsintez celebrates its 85th anniversary since its construction!